By clicking “Accept Cookies”, you agree to the storing of cookies on your device to enhance site navigation, analyze site usage, and assist in our marketing efforts.
PreferencesAccept Cookies
$5 Off Now, Free Uncle Remus Later!

Join the UR Loyalty Program Now for $5 off your next order when you spend $35. Promo might take 10+ minutes to show up in your app.

The history of Uncle Remus began with Gus and Mary Rickette seeking a better life in the north. The next 26 years would be instrumental in the restaurant's famous chicken recipe, specially-blended sauce, and philosophy. 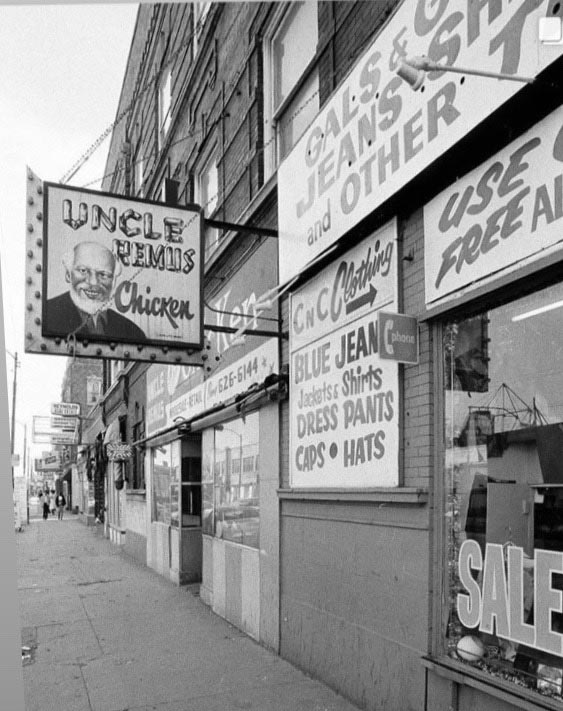 Gus W. Rickette, Sr. and his wife, Mary F. Rickette, grew up poor in Leland, Mississippi. Nevertheless, they developed a wealth of hope and drive, which fueled their dream of seeking a better life in the north, leaving the Jim Crow laws of the south behind.​In 1943, Gus moved to Chicago, intending to secure a good job with the railroad company. However, once he arrived in Chicago, he was overwhelmed by the size of the city. He wandered around, hoping that he would find his friends who had promised to pick him up from the railroad station.
‍
When Gus finally found his friends, he discovered that they were struggling financially. Gus decided that he did not want to burden them with another mouth to feed, so he began to seek work. Gus worked odd jobs in the early mornings, and at lunchtime, Gus found work in downtown restaurants as kitchen help. To save so that he could send for his family, Gus slept on Chicago’s Skid Row or at the Woods Theater.
In 1945, Gus had saved enough to send for his wife Mary, and their three young children. By this time, Gus worked as a janitor and in the brickyards. Mary worked in factory jobs and clerical positions. After approximately 15 years, Gus and Mary were certain there had to be a better way to provide for their family, which had grown from three children to 12. Inspired by the struggles of the Civil Rights Movement, Gus and Mary felt empowered to step out on faith. With no knowledge and limited formal education, Gus and Mary formed a partnership with a friend to establish G & G Chicken Shack in March of 1963 at 135 S.Pulaski.
‍
G & G Chicken Shack thrived and, as a result, a successful business model, which inspired hope in the people of the community, was born. By January 1964, creative differences led to the dissolution of the partnership.​On March 3, 1964, Gus and Mary forged ahead as sole proprietors. They established Royal Chicken, opening one location at 3350 W. Madison and another at 16th and Homan Ave. The third location at 2440 W. Madison opened soon after.
Gus, as CEO, possessed vision, drive, and substantial know-how. According to him, “there was never an idea that could not be improved.” It was this ideology (along with lots of chicken being shaken and floured in brown paper bags and secret-sauce experiments) that led to the development of the restaurant’s famous chicken recipe and specially-blended sauce.
During the 1968 riots, the Royal Chicken locations at 3350 W. Madison and 16th and Homan burned down. The Rickette family was humbled but not discouraged by the destruction. The restaurant at 2440 Madison was standing, unharmed, after the riots. In less than a year, Royal Chicken was back in operation.
‍
Gus and Mary needed a new exterior sign for the restaurant. While looking for a sign, the owner of the sign company showed Gus and Mary one that said, Uncle Remus. The company owner offered to sell it for cheap because the original customer who ordered the sign had changed their mind.
Gus immediately identified with the name of the fictional character, Uncle Remus, from folktales. It prompted him to create a picture of how he envisioned Uncle Remus. Gus added the image to the sign. Once the sign was complete, Gus officially renamed the family business Uncle Remus Chicken Restaurant.
‍
In February of 1969, Gus and Mary opened the first Uncle Remus location at 210 S. Cicero. The bright neon sign caused traffic to stop and heads to turn. Some people stood in line for 45 minutes to get the famous chicken in the bag and secret sauce.
‍
In August of 1969, Gus and Mary opened their largest restaurant at 5611 W. Madison to offer customers a carry-out menu as well as a dine-in food experience. This location still exists and is a staple in the Austin community.
‍
In 1991, Gus and Mary retired from the day-to-day operations and appointed their daughter, Charmaine Rickette Alfred, to run their main location at 5611 W. Madison.

Prices may vary. Prices do not include tax.

All Pictures are shown for illustrative purposes only.